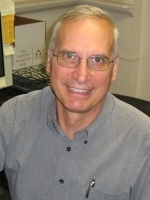 Terry Manahan was born and raised in Lancaster County, PA. He came to know Jesus Christ as his Lord and Savior as a teenager. He had the privilege of receiving extensive training in the Bible and was ordained to the gospel ministry in October 1981. Terry has always been involved in ministering to small churches. He and his family first became involved with FBC in January 1993. Terry has been an elder of FBC since 1996 and carries on the ministry of teaching and overseeing the administration of the church. You will generally see Terry ministering the Word during the 11:00 service Sunday mornings. Besides his ministry at FBC, Terry also works as a social worker in Children’s Services for the Harnett County Department of Social Services.

What is the Gospel?